A chance to read a novel about Broadway, yes; and a novel that features the behind the scenes of a new Broadway production, yes.  I could not be more thrilled to join this Chick Lit Plus Blog Tour.  And the pages of STARSTRUCK did not disappoint. 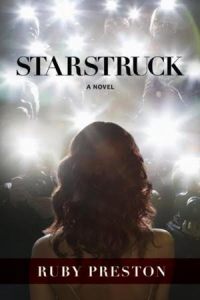 Young and first time producer Scarlett Savoy is taking her off-Broadway production to Broadway this season. This is a retelling of Swan Lake titled Swan Song. Even though Scarlett is the producer her life does not take a back stage to the actors or the production.  She has quite a few men in her life that are part of the production that come in and out of the story.

Read here for a run down of Scarlett’s men: There is Graham Stewart who was destroyed by his divorce and does not want another.  Scarlett and Graham dated in a faux relationship and he offered her a platonic marriage but that was not for Scarlett. But Graham still provided the Broadway theater to Scarlett for SWAN SONG.  Let’s not forget Lawrence, who also dated Scarlett, but more recently the leading lady of the show Bliss Hadley.  That ended badly so we have a nice platform for awkwardness between all. Finally, there is Marco who is Bliss’s recently hired PR guy and former grad student flame of Scarlett’s.  In the end Scarlett makes her choice.

But the reason I loved STARSTRUCK was reading about the launch of a Broadway show.  There is so much to consider and Preston did a great job of bringing those to life in the book. There was strategy and planning, rehearsals, PR and events and other factors that go in to this enormous endeavor. Not to mention the risk of course since many Broadway productions do not make it off the ground and still others only stay open for a short run.

It was not all smooth sailing for Scarlett and STARSTRUCK so dive in and find out if the show makes it and who Scarlett chooses. Thanks Ruby Preston for the light, fun Broadway novel that definitely should be a read for anyone that loves the Great White Way.  Best of luck on your own Broadway adventures, may you produce many shows for us Broadway lovers.

Thanks as always to the amazing Samantha March for her attention to detail and for putting reads in the hands of readers.  Always something fun with books going on at her spots: Chick Lit Plus and CLP Blog Tours.  Be sure to check out the full blog tour Schedule: Starstruck Blog Tour.

With a wave of the wand and a good book in hand travel to places and spaces beyond your imagination. Because reading does not require you to leave the comfort of your own living room or the bunny slippers behind. So if a vacation is not in your plans for this year, take a bookation, you will love it.
View all posts by poofbooks →
This entry was posted in Beach Read, Blog Tour, Book Tour, Books, ChickLit, Fiction Light, Novel and tagged Chick Lit Plus, CLP Blog Tours, Ruby Preston, STARSTRUCK. Bookmark the permalink.